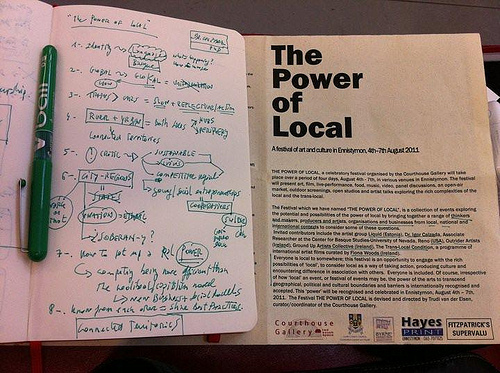 In August 2008, I was invited by Ennistymon’s (West of Ireland, Co. Clare) Arts and Cultural Festival 2011 as a guest speaker to give a talk about “The Power of Local”. I  mainly talked about two concepts that could be applied to territories such as translocality and connectivity. Prologue:
Once more taking a Ryanair flight from Biarritz (in France but part of the Basque Country and City). Once more the destination is Dublin. But the end destination is not just Dublin. Actually it was a good night in Dublin meeting friends and once more capturing the life of this city from Merchant Arch to Harcourt St. Although the most mentioned word in all conversation was just one: “Crisis”, it is kind of a big paradox to realize that the changes that have taken place in Dublin the last 10 years of visiting it (due to Ph.D. City-Region comparative research field-work between Basque Country/City and Dublin City-Region). This kind of traditional, Catholic, political, musical and cultural nature of Ireland was changing maybe 8 years ago as a consequence of the great impact of the “Celtic Tiger” economical “success”. But as we saw recently, Dublin and Ireland, and also many European territories need to be focused on the key-factors of the crisis and again rebuild the economical-political-social basis and principles. Going and getting faster doesn’t mean necessarily arriving better, as we know by analyzing how territories behave nowadays. Look at the best example LA (California) vs Portland (Oregon) with the Urban Growth Boundary or another of the good practices that it is attracting my attention even in Ireland. Let’s say Transition Towns or Transition Movement, generally speaking.

Recently I have also been attracted by Dr. Richard Florida’s new book “Reset”, and noticed that the North American city/territorial perspective cannot be identically applied to European cities and territories. Moreover, I found Florida’s approach really simplistic, it was not enough to explain the deep reasons for this recession. Maybe this is simply because an American cannot understand that the nature of the crisis is just that way property and finance are understood and managed.

I found a much more interesting Swiss writer, Alain de Botton “The Pleassures & Sorrows of Work”  is an ethnographic and good research book analyzing our daily life, production processes of consumed goods, and value chain details. This is really recommendable in order to criticise the current model and the way that our economy and society is built.

Even these days in Ireland, trying to build alternative proposals to “reset” the “real” world around I found a leftie “conservative” ideology around any debate. Said “conservative” responses due to ideas were just complaints, and as we know transforming ideas should come from a new mix of elements of reality, even weird combinations, and combinations in the intersection of disciplines and also social fields. As Frans Johansson proved with the Medicci Effect.

After 10 years of travelling really often to Ireland, it was a pleasure taking part in the Festival held by County Clare’s Ennistymon Courthouse Gallery as a guest and invited speaker to an inspiringly tittled event called “The Power of Local”. The Discussion Panel and the conversations after the event during these days have offered good input in order to check how we could deal with a TransLocal perspective towards the GloKal world challenges.

Let’s share some key ideas from my moleskine notebook after the event (with a little hangover and temperature in my damp “irish” body, do not worry; I will keep alive and kicking ;). While recovering from the flu process in the West of Ireland):

1.- Crisis and recession is just forcing the change in our mindsets on the understanding of austerity. Anyway, that should also lead us to mentally rearrange the importance and the different nature of the upcoming years’ social interaction, communitarian life, entrepreneurial attitude and (which I think is the key and is sometimes forgotten) identity and language as the main engine of this urban, social and civilian transformation.

2.- Social (Urban and Rural) Transformation that needs to start just in the heart of the societies at the lowest level: Local Ecosystems. As a reference, the Basque Country in the past had a huge Social Capital that led it to reinforce thire own language, Basque, as its main means to exist. But the communitarian empowerment even enabled the economical wealth, for instance with the emergence and creation of the worldwide and well-known Co-operative Mondragon experience.

However, at the moment peak oil and climate change are the biggest two threats (besides the financial crisis) which are causing us to rethink again the socio-economical model once more. In this sense the leftie nostalgic ideologies and dogmatic non-practical strategies are not really welcome. Progression requires breakthrough ideas in order to build local ecosystems, as bottom-up collective decision making processes. How does it work? That’s the point that each territory should start thinking about and implementing strategically.

3.- But…is any kind of Territorial Entity suitable to face this issue? According to the territorial development literature, we could agree that the State is not the best administrative and political entity for an efficient Democratic Governance. So what? In my opinion, territories (regions) are in the best position right now to get and to prove that economical and social self-decision making processes and political soberany are linked, and are therefore efficiently and sequentially built.
As Rumford, Chris said:

The most significant developments to emerge from this multidisciplinary exchange are twofold. Firstly, the recognition that distinctly European spaces are emerging, but that the properties, dynamics and potential of these spaces are not sufficiently understood. The corollary of this is that these European spaces cannot be reduced to the interconnectivity of previously existing places or agglomerations of member-state space. Secondly, the idea that the EU represents a complex configuration of spaces and borders which have created the need for unique forms of spatial governance. EU governance works by constructing European spaces which the EU alone is capable of managing. In other words, EU governance is concerned with the construction and management of European spaces, borders, and networks, which are distinct from the territorial places and spaces characteristic of the nation-state.

City-Region could be the best Territorial Entity to get this political and economical empowerment. Then the best political tool or form could be any alternative, but soberany is necessary in order to rearrange the current situation to each geographical circumstance. The point is that the territorial strategic vision should be the Networked Territory, as we are seeing in many City-Region cases around the world, but to be working in its own solution does not mean that we need to forget or even worse avoid the trans-regional solidarity. The World-System Theory of Immanuel Wallerstein is really alive for me at the moment. We could remake the whole world just from our location, micro-territory, neighbour, or village. As a result, Trans-Local (Brickell and Datta, 2011) appears as a really powerful concept to simply to jump the State-structured world, and much more so for those territories with a powerful energy like Basques and others. Energy comes from the identity and language that we keep as a unique personality. In this point, by talking to Irish, Estonian and other people, we could even have a really different path and history in all those places.

Let’s introduce some good photos here provided by the Irish film-maker Fergus Tighe (author of the SeaSide Stories film) and Irish painter/artist Jackie Askew about the village in which I am writing down these lines and where the Festival was held, Ennistymon, Co. Clare, in the way Dorothea Lange took years ago. Really black and white nice local pictures.


This time even inspired me a sort of proto-songs that are also under construction in FasTFatum. In this video I am stepping forward to the studio. Thanks my brother/friend Harkaitz Cano, basque writer, for the co-created lyrics these days. We r all TransLocals (somehow)
I deserve a pint’f’guinnes. Let’s go to a next door pub.
We will see the BBC4 news and connect there with the reality.
My mind is whispering this song inside, stepping outside.
Nouvelle Vague – Guns Of Brixton