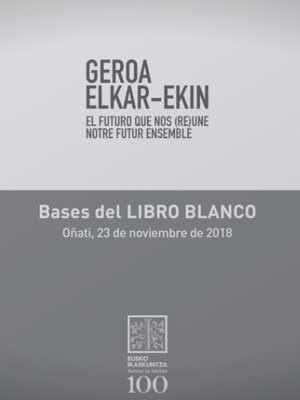 Posted at 09:18h in Projects, Publications by icalzada 0 Comments
0 Likes

The Basque Studies Society, Eusko Ikaskuntza, is preparing a ‘White Paper on the Geographies of the Basque Country’ 2018. On 14th January 2017, some stakeholders were gathered in a participatory setting to discuss and debate on topics such as social capital, diversity, ICT, branding and territorial imaginations and policies (the so called, ‘Euskal Hiria‘ or the ‘Basque City-Region‘. The final aim is to think strategically after leaving behind the political violence dramatic episode and making the best of the territorial synergies onwards. This is the contribution and paper submitted by Dr Calzada (Univ. Oxford) to the strategic period consisting of 2016-2018.

To cite this piece:

Calzada, I. (2017), ‘White Paper on the Geographies of the Basque Country: A Scientific Countribution in a Participatory Setting in a Post-Violence Political Momentum’, working paper delivered on 14th January 2017 in St Sebastian on the Basque Studies Society, Eusko Ikaskuntza event.