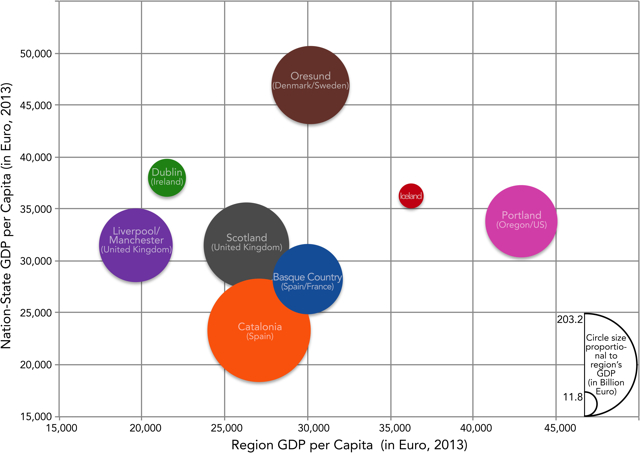 Posted at 18:39h in Publications by icalzada 0 Comments
0 Likes

Dr Calzada has been working in a collaborative publication with Dr Hennig in the crossroads between political devolution processes seen from the social innovation perspective and the way they can be visualised with data. This collaboration’s outcome is the article published in the Political Insight journal by March 2015.

In this article, the authors aims to depict the re-scaling process of the nation-states due to the emergent dynamism provoked by regions. The article portraits by using data visualisation, some cases that are being studied by Dr Calzada under the project ‘Benchmarking Future City-Regions’.

To cite here is the full reference:


2014 will be remembered as a year in which two nation-states faced the debate around city-regional configuration within their borders in very different ways. The United Kingdom witnessed a closely fought pro-union outcome in its Scottish independence referendum while, in Catalonia, despite a consultation process showing a huge majority declare their desire for independence, this outcome was not recognised by the Spanish government.
In an article for the “In Focus” section of Political Insight (April 2015, Volume 6, Issue 1) Benjamin Hennig and I looked at the rapidly changing balance of power between states and their regions. 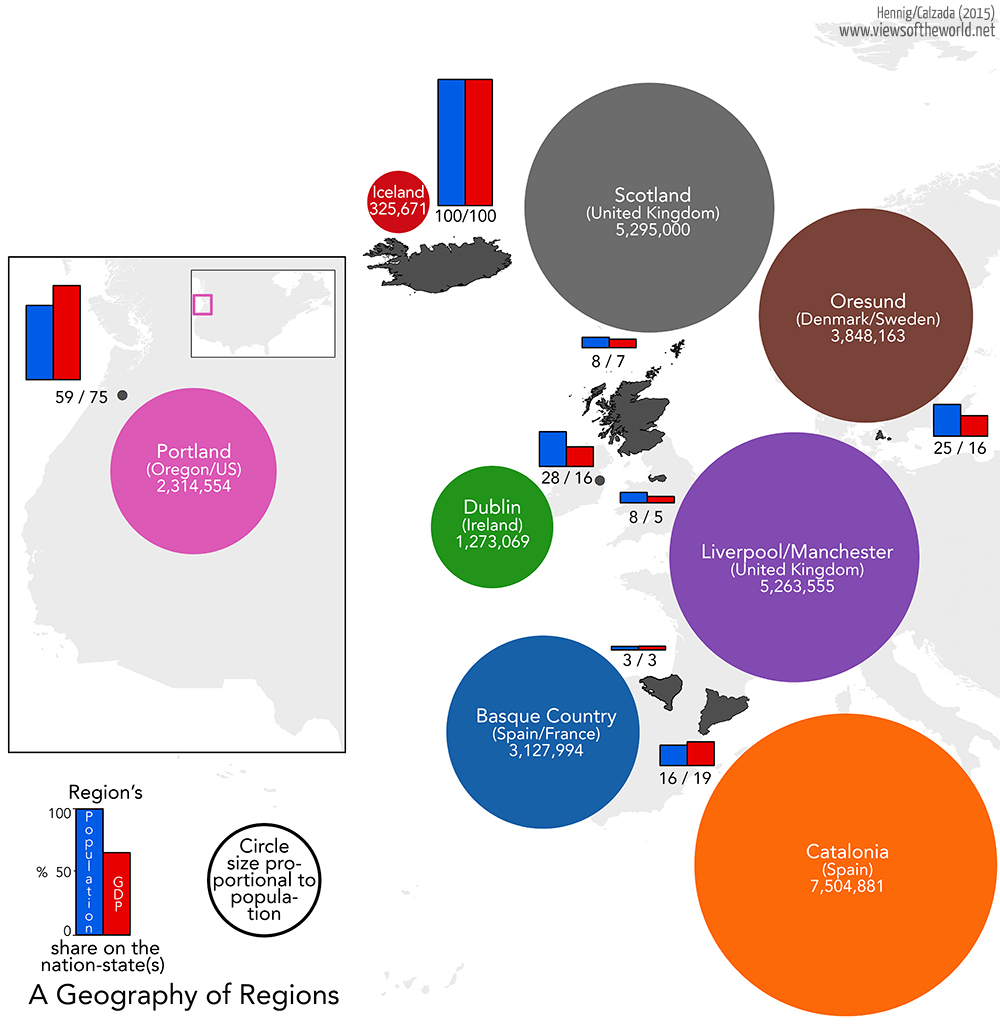 Nation-states and their constituent elements, here referred to as regions, are engaged in a re-scaling process related to the power balance between the region and its nation state. The City-Regions project looks at this process in terms of its tendencies for either recentralisation or independence in the contexts of eight selected regions (referred to as city-regions in the project), which are defined either as distinctive regions within their respective nation-states or as areas crossing national borders that link sufficiently strongly to constitute a region. The eight regions are: Liverpool & Manchester (UK), Scotland (UK), Catalonia (Spain), the Basque Country (Spain/France), Oresund (Denmark/Sweden), Iceland, Dublin (Ireland) and Portland (Oregon State, USA). The selected regions represent different geographical entities of different population and economic characters. On the map above, the varying sizes of circles represent the total population for each region and the GDP of each is shown in the accompanying chart.
Of central importance is that each region is its own dynamic and emergent networked geo-political unit (or ‘city-regions’) and it is this factor that is essentially transforming the natures of the established nation-states. The dynamics involved occur as social innovation processes, which are building a new regional order. This order may be driven by a diverse range of political or economic factors but these can also emphasise tensions in the relationship between nation-states and these regions, stemming from trends towards either greater recentralisation or greater devolution with independence as an ultimate outcome (see the table below for the theoretical framework of these processes in the context of the case study areas).

Investigating the population and GDP contributions of the case-study regions with reference to their nation-states, as shown in the illlustration below, can further an understanding of the source of such tensions. The presentation of the data shows that there is a proportional correlation between the contributions made by population and GDP. The regional order may be characterised in terms of either politically-nationalistic strategies fuelled by community-based national identity or economically-non-nationalistic strategies fuelled by competitiveness-based economic factors. But all of these regions also require a relative equivalence between population and GDP contribution to their referential nation-states, to provoke a tension, and thereby a negotiation, that can lead the relationship between a region and its referential nation-state in one or another direction (towards either recentralisation or independence) as a result of the re-scaling process. To sum up, an increase in the GDP and population contributions made by a region to its nation-state sparks a flurry of consequences involving tensions around political and economic sovereignty, whether in favour of or in opposition to recentralisation or devolution/independence.
In this context, Dublin, Portland and Iceland have all been driven by a recentralisation principle while Oresund and Liverpool/Manchester seem more likely to evolve gradually to become more concerned with devolution. Finally, Scotland, Catalonia and the Basque Country already exhibit a continuous tension that is clearly tilted towards greater devolution or, indeed, even independence. 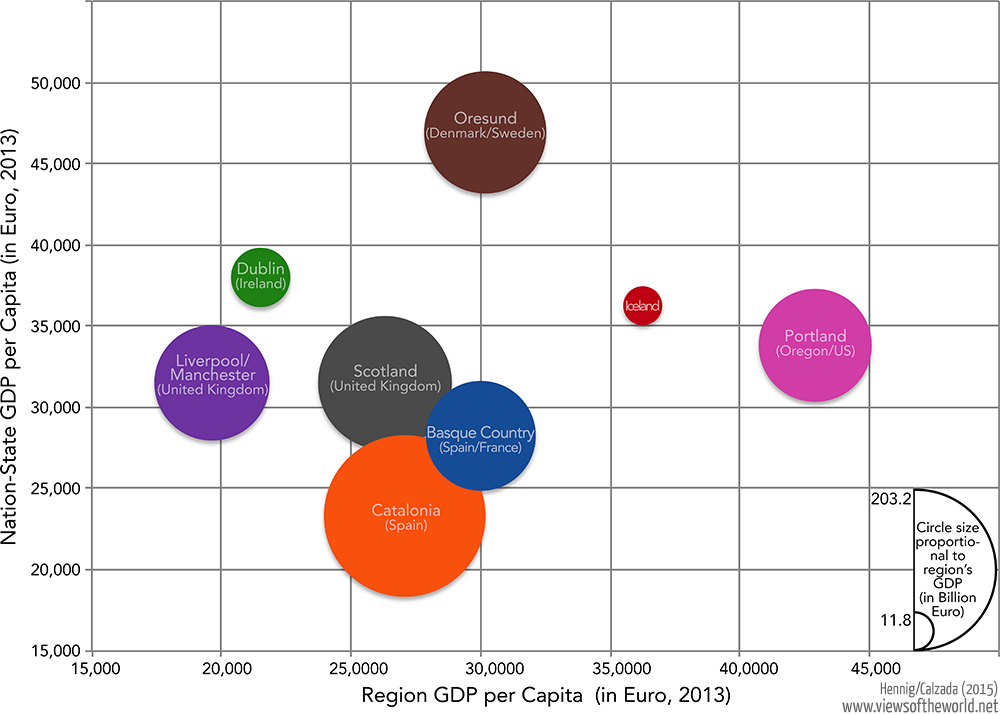 The bibliographic details of the paper are:

The content on this page has been created by Igor Calzada and Benjamin D. Hennig of the University of Oxford. Please contact me for further details on the terms of use.